If you have questions or comments about the Delaware Geocoins we have a discussion area in our Forum.

During the spring of 2007, Delaware Geocaching hosted the Caching Around the Colonial Hundreds Event (C.A.C.H.E.). The event featured 24 geocaches hidden (one each) in the 24 hundreds that existed during Colonial Times. The event culminated in a second event where all those who found all 24 these caches were rewarded with a special geocoin designed by Delaware Geocacher Dinobalz. Additional versions of this coin were minted and Delaware Geocaching has adopted it as the Official 2007 Delaware State Geocoin. 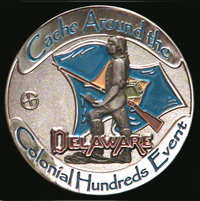 This polished nickle and antique brass version of the coin is the prize edition.  Copies of this coin were presented to geocachers who found all 24 of the event geocaches. Less then 200 of these were minted. 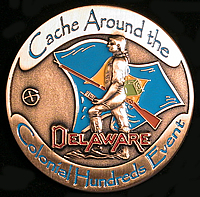 The antigue gold version of the coin is the standard edition. Only 500 of these were minted and it is the one and only Official 2007 Delaware State Geocoin. We expect these coins to go fast.This coin will make any collection shine. 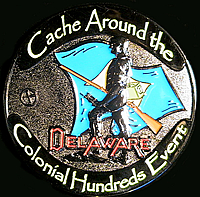 The Black version of the coin is primarily for Delaware Geocaching use. Only 50 of them were minted.

This coin is not for sale. Instead Delaware Geocaching will use them for very special club prizes. One or more may also be raffeled at events.

The limited edition geocoin was designed for the collector.  Only three hundred coins were minted.

The coin sold for $12 and sales were limited to one per customer/shipping address.  The proceeds from the sales of this coin went towards a “Grand Experiment”.  The club bought regular edition geocoins with the proceeds and put them into caches all over the world.  Geocoins belong in caches and this gave the average cacher an opportunity to find a state coin.

This coin was designed to make any collection shine.  A must for the collector interested in state coins was the one and only Official 2005 Delaware State Geocoin.

The coin sold for $8 and sales were used for club activities.

This version of the coin was part of the “Grand Experiment”.  It was not for sale by Delaware Geocachers.  A quantity of coins were bought and activated under the club account.  It was intended that they had no trade value.

The concept was to make an ugly coin that someone would NOT want to swipe them from the geocaches.  The hope was also to flood the geocaches with the ugly coin so the regular coin would retain their value as a collectors item.  The coins were cheaper for the club to purchase because of the materials they were made with.  A large number were minted.